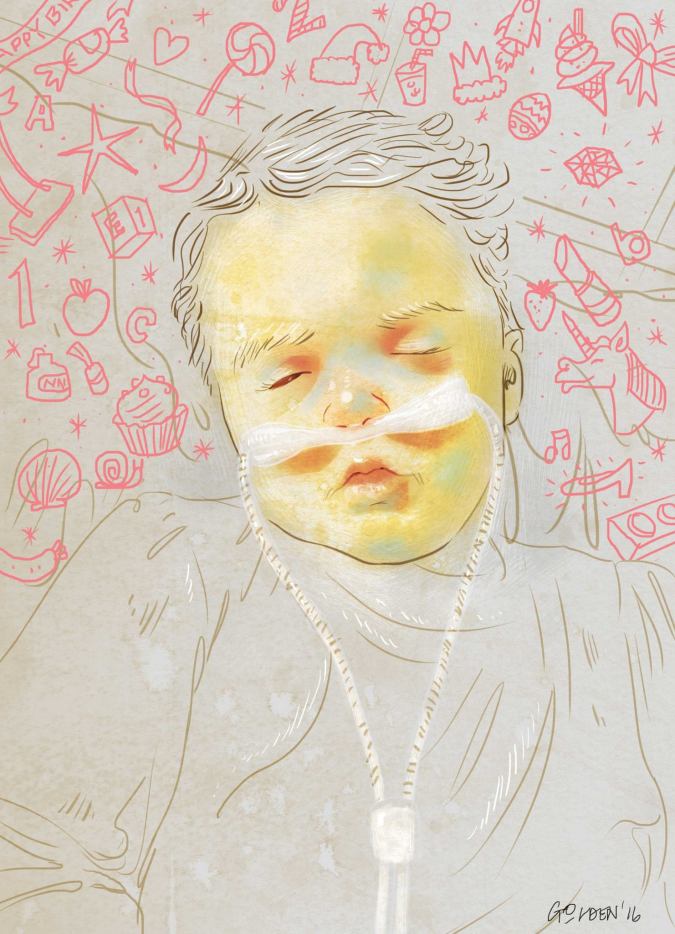 So 2016 has started pretty much the same way as 2015. Watching our beautiful little girl struggling for breath, with nose-diving oxygen sats and a wheeze that would fill every cell of your body with dread. It started with a fever, turned into a runny nose and 72 hours after the first cough, she ended up in hospital with pneumonia. From first cough to pneumonia in 72 hours, just contemplate that for a second. That’s what living with CF is like. It’s that cruel. It’s that unpredictable. It’s that heartbreaking. Our daughter has only just turned 3 and has just spent another 10 nights in hospital on oxygen – what kind of a life is this?

And yet whether or not Ireland will approve the new drug from Vertex Pharmaceuticals called Orkambi, the first drug to treat the underlying cause of Cystic Fibrosis for patients with two copies of the mutation Delta F508, is actually up for debate!

To be clear from the outset, my daughter unfortunately won’t benefit from Orkambi because she only has one copy of the Delta F508 mutation. Her other mutation is a rare one called R560T. But as I reflect on another arduous stay in Temple Street, with its several failed IV access attempts, the panic on our daughter’s face as she coughed till she vomited, the nose cannulas pumping oxygen into her lungs, the 9 nebulisers a day, and the emergency Doctor and Physio callout in the middle of the night due to tumbling sats not picking up with increased oxygen, I can’t help but think of the 600+ people in Ireland that would benefit from it. And it makes me sick to think that they have to fight for the right to this medicine. They fight for life every single day as it is. And now they have to fight to prove that their lives are worth the price tag that this life-changing medication comes with.

I understand that the price needs to be looked at. I agree that it’s expensive and the price needs to be negotiated. I take no issue with the fact that it has to go through an assessment and approval process. But I do take issue with the way the CF Community has been treated in advance of these assessments taking place – articles in the media stating that the HSE will not fund the drug ignited fear and panic in a community that’s already under stress and duress most of the time. Why prejudice the decision in advance of assessment? Why make people feel that their lives come with a price tag? Why make it seem like a decision has been made before a decision has been made?

People with Cystic Fibrosis often describe the illness as feeling like they’re drowning on the inside, as they struggle to deal with the excess mucus in their lungs. Meanwhile parents of children with CF frequently feel like they’re drowning in their own fears and feelings – feelings of being constantly overwhelmed, forever worried and scared for their children, while trying to put a brave face on it and truck on, wishing they could just take it away.

In the online CF Mammies support group I’m part of, the 16 days of this year alone have already seen several children in hospital for lengthy stays, some in ICU. These 16 days have seen children on oxygen, children on IV antibiotics, children on inhaled nebulised antibiotics that are so strong they come with the risk of hearing and sight loss, children screaming with the pain of bowel blockages, children losing weight despite eating constantly, children who need operations for PEG feeding tubes who are being given appointments that are over a year away. Then outside of our group, there’s an 11-year-old boy from Cork getting home after a lung transplant and another 11-year-old who just a few days ago lost their fight with CF. THIS IS REALITY.

And yet this is also reality – here are a few key facts about Orkambi from Cystic Fibrosis Ireland:

In Orkambi we have a drug that has the potential to lengthen lives, improve quality of life and delay the need for lung transplantation. So in 2016, let’s change our attitude to healthcare. Let’s try and decrease the number of CF infections, instead of just trying to treat them in hospital. Let’s move with the times. Let’s embrace the amazing science that’s out there; the science that’s hunting CF down. Because what good is this science without access to its fruits?

As CF parents, all we want to do is rewrite our children’s futures. We want them to dream big, to dream tall, to dream past the early expiration dates that have been put on their lives. Orkambi is the start of this dream becoming a reality. We shouldn’t have to fight for our children’s lives, but believe us if you make us, that fight will be relentless.

And just wait until a drug for Eva comes along…

If you haven’t yet signed the petition for access to Orkambi, please do so here:

This site uses Akismet to reduce spam. Learn how your comment data is processed.